The Christmas season is finally upon us and as usual, it didn’t forget to come with its ‘good tidings’. While we roll with the Christmas tide, shopping should be one of the numerous things on our mind. If Santa isn’t going to show up AGAIN in Nigeria, what will you get yourself? At least you’re not naughty to yourself. 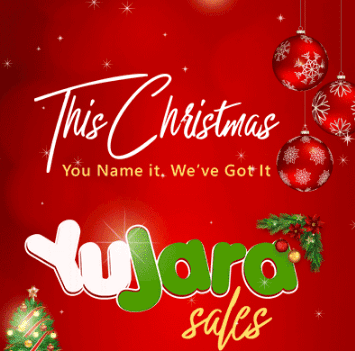 Here comes Yudala, just at the right time with its yearly Yu-Jara Xmas sales. The catchy name jara is an everyday slang in Nigeria. Which refers to an extra addition given to a good consumer in other to appreciate his patronage.

In Falz voice: – Street boys can know how to ask for ‘JARA!’ If you’re from the street and you don’t know this then you need to be taught a Nigerian lesson. Lol.

So if you have not gone shopping for the Christmas party, which am guessing you haven’t, now is a chance. Yu-jara  (Yudala Jara) sales has kicked off. It started 9th December and will end 20th December 2016.

MUST READ:  How To Make Christmas Trees At Home🎄

I took a peep into their YuJara Xmas shopping page and found some really amazing offers and deals.

Our beloved women are not left of this awesome deals, you can also find cheap and stylish clothing for your mother, sister, bae, even for your pastor’s wife. Yu-jara Xmas shopping deals don’t end there, it stretches down to bottles of the finest Champagne and Cognacs as well as Fancy and Durable Uensils and kitchen cutleries.

MUST READ:  How To Celebrate Christmas This Year

There is just so much for everyone, just name it, they’ve got it. What better way to end the year than this!

Don’t miss Yu-jara and you sure won’t miss out on the mother of all Xmas sales.