Skip to content
There goes the usual saying “What goes up must come down”, bullets is not left out of this.
You might have watched either a Military or Para-military parade once or twice, or a funeral of any military officer.
Shooting into the air is always part of their tradition. While these bullets go into the air, everybody try to stay clear. We don’t know where the bullets go or if they could hurt us so we just run for our dear life. 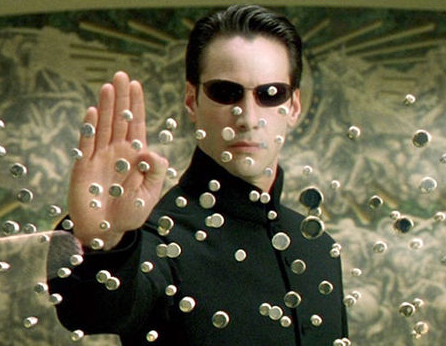 Do you remember a movie ‘Matrix’? Most of the actions there are science fiction (film trick). So if you place your judgement on those bullet dodging scene, you will get a negative answer.
I enjoyed watching the movie ‘Matrix’ , but the answer to this question is based on physics principles and I will try explaining it in simple English terms.
Bullets fly into the air with an energy they carry (i.e. kinetic energy). When a bullet goes into the air, it gets to a point in the air where it will lose its energy and starts falling at a much slower speed, slower than the speed by which it left the gun and went into the air.
Its advisable to run for your life because bullets falling down are still dangerous but not as dangerous as it was shot.
If bullets were shot into the air vertically (straight up), then it should not be able to cause serious damage when falling. But if the bullet is not shot vertically (not straight), it will maintain its initial speed and get to a height where it would cause great injury. So far long it was bent, the bullets falling will still be dangerous.

In most countries and states, shooting into the air is illegal and is not even advised of a police man. Two victims of falling bullets got injured; one had a minor injury while the other had a serious injury.
Hope you learnt something today? If you have any contribution, kindly use the comment box.
MUST READ:  9 Colors Of Death! What's The Worst Phone Color?

Remember to run for your life whenever you hear a gun shot.

Shocking But True! You Can Charge Your Phone With An Apple
Since Right To Internet Is A Human Right, Should Prisoners Be Online Behind Bars?
Is Google A Girl? Why Then Do Its Operating System Answering 'Girly' and 'Foodie' Names?