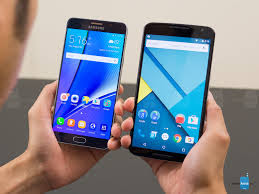 For the last few years, Samsung has dominated the premium phablet space with its Galaxy Note devices
They had the best screens and the biggest batteries for those who wanted a large phone. Now Google has refined the Nexus lineup and is offering the Nexus 6P, a pure Android phablet with great hardware at a reasonable price. It doesn’t have the same productivity features Samsung touts in the Note 5, but let’s see how they stack up.

Gone are the days of plastic Samsung flagship phones. Now it’s all about metal and glass, which forms the entirety of the Note 5’s body. It has an aluminum band around the edge and a glass panel on the back. The Note 5’s rear panel is curved a bit at the edges to make the larger phone easier to hold, but it is still made of slippery glass. The Nexus 6P is by far the most sturdy Nexus phone ever built. It has an aluminum unibody frame that wraps around the edges of the device. There’s a Gorilla Glass panel on the back that houses some antennas and the camera as well. The Note 5 and Nexus 6P have a similar feel in the hand as they have very similar sizes and weight. The Nexus is 7.3mm thick compared with the Note 5 at 7.6mm. The Nexus 6P weighs 179g, which is only a little heavier than the 171g Note 5. The Nexus 6Pa also has front-facing stereo speakers, but the Note 5 only has one speaker mounted on the bottom.

Because these are both sealed devices, the batteries aren’t intended to be swapped by the user. The Samsung device has a 3,000mAh cell, which is a little smaller than past Note devices. It’s a reasonable battery for a phablet, but plenty of enthusiast users are disappointed that you can’t swap batteries when that was a hallmark of past Notes. The Nexus 6P comes from a long line of devices without swappable batteries, so it’s more expected. Huawei also managed to cram in a larger 3,450mAh battery. In general, the Nexus gets better battery life than the Note 5, but that’s also thanks to the software, which we’ll get to later.

On the front of the Note 5 is Samsung’s customary array of physical navigation buttons under the screen. The back and multitasking buttons are capacitive, and the home button clicks. That’s also where the fingerprint sensor is on this device. It’s fast and reliable, but it seems less special now that the Nexus 6P is available. There are no physical nav buttons on this phone, but it does have a fingerprint sensor on the back right where your index finger likes to sit. This makes it a snap to unlock the phone — just tap the sensor (called Nexus Imprint) and the phone wakes up and unlocks. It’s faster and more convenient than Samsung’s implementation.
Display and internals

Samsung has been the king of smartphone displays for years. That’s still true, but only because it made the panel on the Huawei-built Nexus 6P. Google and Huawei actually worked out a deal to get the latest generation AMOLED tech for the new Nexus phone, which has never happened before to my knowledge. Samsung usually only sells the last-gen technology to other manufacturers.

Both the Nexus 6P and Note 5 have a 5.7-inch 2560×1440 Super AMOLED (518 pixels per inch). They both look absolutely fantastic with very good clarity and high maximum brightness. They’re very usable outdoors, and the colors are vibrant without being blown out. Google has also added a more accurate optional sRGB color mode to the Nexus 6P, which is a nice touch. The Note 5’s screen might be calibrated a little better in the default mode, but the real difference is the included digitizer for Samsung’s S Pen. The S Pen docks in the bottom of the Note 5, allowing you to write on the screen almost like you would on paper. The S Pen has pressure sensitivity and quick access to a raft of Samsung productivity tools. The S Pen is the best stylus you can get on an Android phone right now, and the Nexus 6P doesn’t really have an equivalent feature.

On the inside, the Note 5 and Nexus 6P are simultaneously the same and quite different. Both have an octa-core 64-bit ARM chip, but the have different pedigrees. The Note 5 runs on the Samsung Exynos 7420 with a quad-core cluster of high-power Cortex-A57 CPUs and a second group of four highly efficient Cortex-A53 cores. It runs cooler and faster than the Snapdragon 810 in most other phones. The Nexus 6P has a Qualcomm Snapdragon 810 with the same core configuration, but this chip has been extremely warm in other devices, which has led to heavy thermal throttling. Interestingly, the Nexus 6P seems to avoid all that. It’s fast and it stays fast without overheating. The Nexus 6P also has 3GB of RAM and comes in 32, 64, and 128GB storage variants. The Note 5 has 4GB of RAM and only comes in 32GB and 64GB versions. Neither device has a microSD card slot for added storage, but Samsung’s UFS 2.0 NAND flash is much faster than the eMMC 5.0 used in the Nexus 6P. Not many activities will make use of that, but it might come up from time to time. It’s worth noting that Samsung’s memory management model in TouchWiz leans toward closing apps in the background rather than filling up all the available RAM first.

Google has finally started taking the camera experience seriously with the Nexus 6P. This device has a 12.3MP sensor with large 1.55µm pixels and a f/2.0 aperture. That means it takes great low-light shots, and there’s laser-assisted autofocus to make sure you capture your subject. The Note 5 has a similarly excellent 16MP camera with an f/1.9 aperture. It doesn’t have laser autofocus, but it’s still very effective at finding the subject, though a little slower. Samsung’s camera adds optical image stabilization, which compensates for hand shakes while taking photos and video. The Nexus 6P doesn’t have that, but there’s electronic stabilization for video. It works well enough, and the still photos are usually captured fast enough that the lack of OIS isn’t a big deal.

HDR image capture is very good on both phones, but it’s substantially faster on the Note 5. Google’s HDR+ implementation produces very well-exposed images, but it takes longer to capture. That can cause some blurring with moving subjects.

Software and everything else

Here’s where things really get interesting — Samsung has always had great hardware features (eg, screens and cameras), but software has been an issue. Samsung’s Android UI is known as TouchWiz, and it’s been greatly despised in past years. The company started to turn things around with the Galaxy S5, and on the Note 5 things are vastly improved. The UI is more responsive and most of the half-finished features have been removed. The strange blue-green UI remains, but at least there’s even a theme store that can change it.

The Note 5 is running Android 5.1.1 right now, but the Nexus 6P is shipping with Android 6.0 Marshmallow. Because this is stock Android running on a Nexus device, you get all the latest and greatest features with none of the carrier bloatware. In fact, Google has even reduced the number of pre-loaded apps it includes. The UI is just much more attractive and consistent than what Samsung is doing right now. The Nexus 6P has a ton of cool Marshmallow features like doze mode to reduce idle battery drain, more granular app permissions, and Google Now On Tap. On that last count, I’m not completely smitten with On Tap yet (it seems to miss a lot of stuff), but it has potential. The Note 5 will get an update to Android 6.0 in the coming months with many of these features, but it has all the stylus additions as well.

Samsung’s Air Command pop up is accessible at any time with the S Pen stylus — just tap the button. It offers quick access to the note taking and screen capture tools designed specifically for this input device. These are things you don’t get on the Nexus 6P, but you really only benefit if you’re a fan of styluses. If the S Pen never comes out of the holder, the Note 5 loses much of its distinctiveness. The Note 5 is available from all the major carriers, and you can get a GSM unlocked version if you don’t mind scrounging around in the gray market. The upshot is that you can buy a Note 5 on a payment plan with your carrier. The Nexus 6P is available only from Google, and isn’t expected to come to any carrier stores. It’s completely unlocked and has support for CDMA and GSM networks with a ton of LTE bands. Since Google sends out the updates to this phone, there will be no messy carrier delays for this phone.

The Note 5’s full price is upwards of $700 for the 32GB model. It’s a good thing carriers will let you finance that, because it’s a lot to drop on a phone. The Nexus 6P, however, retails at $500 for the 32GB. You have to pay that all upfront or you can finance it with a Project Fi line of service.

Hurry Now! Etisalat Is Giving Free 4GB Data
How To Get Your SMALL Business To The BIG World
Facebook And Google Celebrates 2016 Leap Year