Toyota has seven hybrids on the market right now. Soon, it will have eight, thanks to the new 2016 RAV4 Hybrid. The brand’s smallest crossover has finally received partial battery power, and it’s looking like quite the package — especially since you can’t buy one in any of the RAV4’s lesser trim levels.

No matter which trim you opt for, what powers the RAV4 Hybrid remains the same. The engine is a non-turbocharged, 2.5-liter four cylinder. Mated to the electric half of the powertrain, the whole system puts out 194 horsepower and 206 pound-feet of torque with standard all-wheel drive. That’s enough to send the car to 60 mph in 8.1 seconds. Not only is the hybrid the most fuel-efficient RAV4, it’s also the best performing.

Speaking of fuel economy, EPA estimates are not yet available, but Toyota believes the RAV4 Hybrid will achieve 34 mpg city, 31 mpg highway and 33 mpg combined. 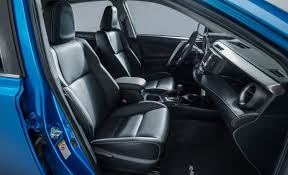 If you have an insatiable thirst for electric propulsion.
The RAV4 Hybrid comes with an EV Mode switch, which allows for travel on battery power alone. However, the nickel-metal hydride battery’s limited capacity means EV Mode only works for 0.6 miles at a time, at speeds up to 25 mph. To push that power pack to its limits, the car also comes equipped with regenerative braking, which uses deceleration as a generator to give the battery a little extra juice.

The hybrid is part of a larger refresh that covers all RAV4 models. The front end looks a bit sharper, with thinner headlights and a grille that’s a little less beaklike than before. Parts of the RAV4’s front end, especially the lower bumper, incorporate some vague styling cues from the Mirai hydrogen fuel-cell vehicle. The rear end features upgraded taillights and a new shark-fin antenna.

The interior is largely unchanged — the only new bits are LED lower center console lights, a 12-volt outlet for rear passengers, a new sunglass holder and a revised cupholder design to allow for mugs with larger handles. All hybrid models feature a gauge cluster with a 4.2-inch TFT screen that displays pertinent vehicle information, including a trick little diagram explaining how the hybrid system is working.

Charge your phone from hot or cold drinks with this Device

Charge your phone from hot or cold drinks with this Device

Best Way To Know If Your iPhone Is Charging Or Not

Have you been jingling your charging cable around wondering if your iPhone is charging?...

How To Reset Sharp Copier In 2 Easy Steps

How To Forward and Unforward Calls [Best Guide Online]

Flock of Seagulls Hair: What I Wish Everyone Knew About It

Dial This Code To Check Your Current Airtel Tariff Plan