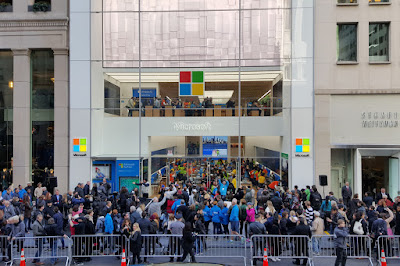 At times Christmas can be so void

Merry this and Merry that without even caring if some things we do are wrong.

form no where comes this nice Offer by Microsoft.

On Tuesday, a holiday ad  was published in it, the representatives of the Redmond, Washington, tech giant sing about peace and goodwill.
It all appeared to be real.

They were singing outside Apple’s iconic Fifth Avenue store in New York, just to prove how much they mean it.

In this ad, Microsoft reveals that its employees wanted to “deliver a special message to some old friends.”

They practically marched down the road, together with a local children’s choir, as the sang about letting there be peace on Earth and “let it begin with me.”

MUST READ:  How To Get Your SMALL Business To The BIG World

Since Satya Nadella became CEO Microsoft , he has made the company to understanding that people are using numerous devices (an example is the Apple variety), so Microsoft ought to make it easy for its software to be used on all of them.

Surely, though, even Apple will be moved by this proactive, festive, beautiful and human gesture on the part of Microsoft’s employees. Its new store is but a snowball throw down Fifth Avenue.

MUST READ:  Samsung might include 3D Touch technology in its upcoming flagship Galaxy S7

Apple didn’t immediately respond to a request for comment. Perhaps it’s still writing its own song in response. However, during the ad Apple employees are outside and enjoying the festive spirit.

The ad ends with the idea that we should “spread harmony.” For myself, I think Microsoft has spread more than that in this instance, with an ad that’s a little more clever and sincere than Apple’s slightly saccharine effort.

Microsoft has cheekily turned the other cheek and offered a poignantly appropriate message for the world.

Game of Speed: Top Five Fastest Train in the World
NCC Says Internet Users In Nigeria Has Reduced Again To 92 Million
Meet another E-commerce Dealer (FreeJaja)
MUST READ:  How You Could Possibly Make Money From Your Facebook Post