Skip to content
The Social media giant, Facebook had recently expanded its ‘like’ icon to a complete six pack of ‘Reaction’ emoji showing Like, Love, Laughing, Wow, Sad and Angry emotions. This has totally removed the odd situations where users would ‘like’ statuses with sorrowful messages, not allowing them to react more appropriately. All thanks to a developer name Rodney Folz, who have made Facebook emojis more fun. You can now replace the usual emojis with faces of Donal Trump, characters from Pokemon, Canadian Prime Minister Justin Trudeau, Dead pool, Rihanna, Big Time Rush, Star Wars, other icons of your choice. The developer has called it Reaction Packs.

So if the in built emoji don’t do, simply use the Reaction pack extension on your Firefox or google chrome. 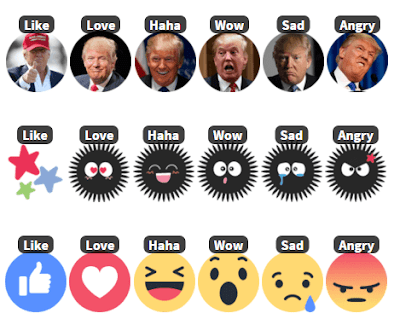 Here is how you can use the Chrome and Firefox desktop browser version to change the regular Facebook inbuilt reaction emoji character.

1. Open the web browser on your computer (either Google Chrome or Mozilla Firefox)

Restart the same browser, if done properly, you should see the new reaction packs instead of the original Reaction emoji faces.

NOTE: once you upload any emoji character and start using it, only you or any other person who has installed the plugin can see the emoji difference.

What would you go for? Pokemon characters, Donald Trump faces, or something else, maybe Game of Throne characters? Tell us via the comments.