Skip to content
Emoji in their own various ways have actually become a language. This is because they have this natural ability to convey greater messages that what they immediately imply. 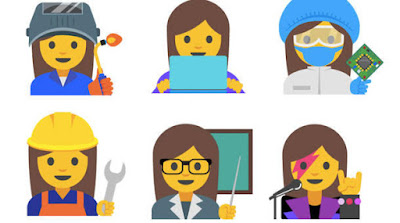 Despite the presence of different Emoji, some of us are pretty much tired of using the same existing emojis every day. If you are a female or a fan of emoji, now is a right time to rejoice because Google has agreed to add some brand new emoji that will feature great women characters.
Google announced on Thursday that an agreement has been made by the emoji sub-committee of the Unicode consortium, a non-profit making organization that is into the development and promotion of software internationalization standards. They will be adding eleven (11) new characters that will represent professional women in different skin colour.
Very soon, you will be able to send text messages and include a woman as a teacher, mechanics, welder, scientist, coder, health worker and a couple others. The best part of this is that Unicode will add 33 versions of already existing male and female emoji.
This developments came as a result of the proposal submitted by four Google employees to Unicode; debating that there is an absence of active and professional female emoji. The proposal had suggestions of adding 13 New Female Emojis to better explain the roles women play in the world at large.
According to Google, the proposed emoji will probably be used in the near future and also in future versions of Android. However, the release date hasn’t been revealed.
In celebrating this move, a spokesman to Google said that
“We hope these updates help make emoji just a little more representative of the millions of people around the world who use them.”