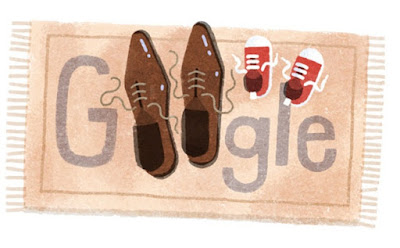 The doodle created for the Father’s day has the same concept with that of the Mother’s day, but this time, the image shows a pair of Dad’s shoes on a rug with the word Google written on it, accompanied with a pair of a child’s shoes. It simply means how we as children, follow our dad’s footsteps very close.
Every year, the day of celebration is fixed for the 3rd Sunday of June to recognize and appreciate the contributions that our fathers and father figures make to the lives of their own children.

How It All Started!

There are different stories narrating where and how the Father’s day started, but the most popular of them is the one about a young girl called Sonora Dodd of Spokane, Washington. She and her siblings were all raised by a single father, William Jackson Smart.
MUST READ:  Maliyo Games Is Hosting An Event At Social Media Week Lagos

Long time ago, in May 1909, she was listening to a church sermon on Mother’s Day, when an idea came to her, to have a day to celebrate dads, especially hers.

The following year, she wanted to celebrate the Father’s day on June 5th, her father’s birthday. She petitioned for the holiday to be recognized by the city but it took time and eventually, the first Father’s Day was officially celebrated on June 19, 1910.
Happy father’s day to our dear fathers.