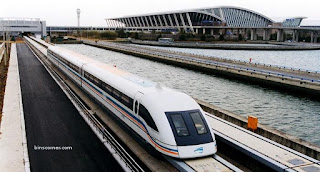 1. Shanghai Maglev
The journey from Shanghai to Shanghai Airport only takes 7 minutes and 20 seconds, thanks to the incredible maglev train. This train uses magnets to levitate above the tracks, thus reducing friction and reaching speeds of 430Km/h (267mph).

2. Harmony CRH 380E
If you travel between Shanghai and Beijing, take the Harmony lines. It took four and a half years to build the tracks, costing upwards of $17 billion, and is now the world’s second-fastest train. Before the construction of this line, the 1,000Km (621 miles) drive would take about 10 hours. Now, this long ride takes less than 3 hours, and the train rockets at speeds of 380Km/h (236mph).

3. AVG Italo
The most modern train in Europe started its service in 2012 and runs the Naples-Rome-Florence-Milan-Bologna line. This 360Km/h (223mph) train is known for its comfortable seats, low maintenance, energy efficiency and the quietness of the cabins.

4. Siemens Velaro E / AVS 103
The fourth fastest train in the world travels the line between Madrid and Barcelona on a track measuring 621Km (385 miles). It is the fastest train in Spain and reaches speeds of 350Km/h, though during one ride it went as fast as 403Km/h (250mph)!

5. Taglo (T350)
Nicknamed “The Duck”, due to its elongated front end, this train will take you from Barcelona or Madrid to Valladolid in Spain, at a speed of 350Km/h (217mph).

Motorola have let us down
ZTE First Smartphone Launches in Canada
Pavlok: The WristBand That Shocks You When Ever You Spend Too Much Money
MUST READ:  How To Get Free Data On Airtel-Free Airtime Hack