Skip to content
For a while now, Facebook has been showcasing its increasing interest on video contents on its social networking website. In trying to make these contents personal, Facebook has started releasing new features and tools that will give you a short video recap of all the birthday wishes you receive. 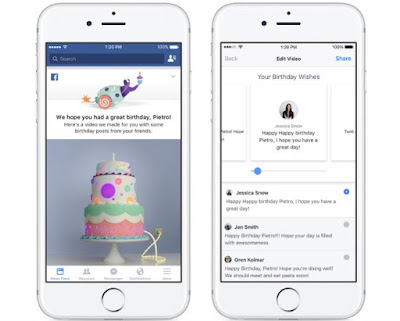 Facebook is actually a nice place to keep track of friend’s birthday, since all your Facebook friends gets notified whenever your birthday approaches, the social media has become an online place where birthday wishes and greetings are sent in massive number.
What this new feature does is that it collects all the messages you received on your birthday from family, friends, acquaintances and even strangers and convert them into a video, you will get to see the video just after the birthday is over.
The birthday recap video will appear at the top of your news feed, there you will find a 45 seconds preview. You get to edit the video, chose to remove or add any special post you desire and then share it with your friends and the world at large.
An example of the birthday recap feature was uploaded by Josh Constine, a YouTube user.
According to Tech site, Mashable, there are over 100 billion birthday messages posted on Facebook every day.