Skip to content
While some Chinese athletes were at Rio Olympics winning medals, some Chinese machines were busy in China setting their very own world record. On the last weekend in the month of July, 1,007 robots at the Qingdao Beer Festival in China successfully broken the World Guinness Record for the highest number of robots in a synchronized dance. 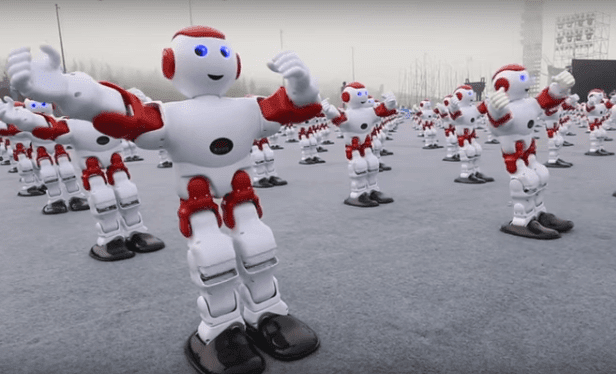 The attempt to break the record initially started with 1,040 robot dancers, but due to malfunctioning of some of the robots, they had to be taken out. The record was finally set by just 1,007 red and white robots dancing together in unison for a full minute. The old record was set earlier in February by UBTECH Robotics, a company based Shenzhen, China.

The 17.2 inch and identical “QRC-2” robots were produced and programmed to help market the products of its manufacturers, Ever Win Company, an electronics company based in Qingao, China.

According to Guinness World records, the robots in the dance were simply controlled by a one single phone. They were built with a special encryption technology to ensure that radio interference from phones and bluetooth devices are reduced.

It is worth mentioning that this is not the first case of robot ‘fever’ in China as the country plans to officially deploy millions of robots in its manufacturing industries. Currently restaurants in china are employing robots to wait on tables.

The synchronized robot dance performance by 1,007 robots has given China a new Guinness World Record for “Most robots dancing simultaneously.”

Check out the dance below: