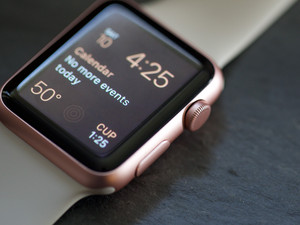 Even without an iPhone, you can still do a lot with your Apple Watch.
The Apple Watch and the iPhone may be two devices that go better together, but Apple’s wearable is still powerful in its own right. If you leave your iPhone at home, here’s what the Watch can do on its own.
It can tell the time
Unsurprisingly, timekeeping will continue to work as advertised, and you’ll be able to set alarms and timers, see your calendar details, and more.
The only thing you’re missing without an iPhone is an occasional ping to make sure the time as kept on the Watch is identical to the time as dictated by the global standard, but unless you’re planning on being away from your iPhone for months, you should be just fine.
It can play music and showcase your favorite photos
Even without an iPhone in your pocket, you and your Watch will be able to groove along to any music playlists you’ve stored on your device (up to 2GB worth) with wireless Bluetooth headphones. You’ll also be able to view any local photos from iCloud Photo Library (up to 75MB).
Your other songs and photos are safe and sound, but inaccessible until you once again connect to your phone.
It can track your fitness (but not your distance)
Go out on a run without your iPhone, and the Watch will continue tracking your fitness — that includes your heartbeat, step counts, stairs climbed, and stand-sit ratio.
All that information is stored locally while you’re away from your iPhone, and will be synced with the Health app as soon as you’re within pairing range. You won’t be able to track distance or specific routes, however, as the Watch has no GPS receiver.
It can use Apple Pay and Passbook
Even Apple Pay works while you’re away from your iPhone: The Watch stores your Apple Pay cards as unique tokens on the device; when you activate Apple Pay near an NFC reader, the Watch uses the terminal to transmit and confirm your payment. You don’t have to worry about having your iPhone on you if you pick up Starbucks after a run, for example.
The same goes with Passbook: Any gift cards, boarding passes, or loyalty cards you’ve added on your iPhone are automatically synced with the Watch.
Connect to the Internet (if you’ve been there before with your iPhone)
Even if you don’t have your phone handy, your watchOS 2-based Apple Watch can hop on previously used Wi-Fi networks. Whether it’s your local network, a nearby coffee shop, or your friend’s house, your Apple Watch should still be able to access the internet.
Use standalone third-party apps 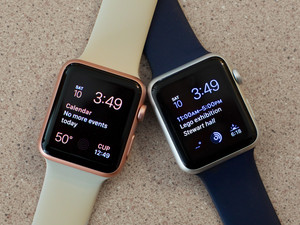 As of watchOS 2, there are two kinds of Apple Watch apps: iPhone-based and stand-alone. The former require an iPhone to function: All the Watch contains is their interface. Currently loaded data will be cached, but otherwise looks (notifications) won’t come in, glances (widgets) won’t update, and WatchKit apps won’t stay interactive. Think of it like going into a kind of Airplane mode until the iPhone connection is restored.
Stand-alone apps, however, can continue rocking long after you’ve left your iPhone at home. This includes third-party apps that use the heart sensor, games, and even internet-based apps—assuming you have access to a remembered Wi-Fi point.
What it can’t do: Connect to GPS or Siri
Now, there are still some things that won’t be functional when your iPhone is away, including GPS-related activities (the Apple Watch doesn’t have an embedded GPS receiver). Siri, too, is MIA, as it relies on both a data connection and Siri processing from the iPhone to work its magic.
Questions?
Drop them below.