These Cars Have Dominated Nigerian Roads 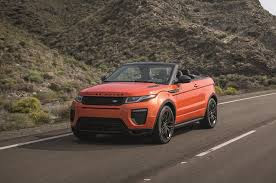 The convertible crossover remains one segment where next to no automakers have ventured
— the most recent attempt, Nissan’s Murano CrossCabriolet, was not a resounding success. Nevertheless, yet another manufacturer is having a go at it. This time, it’s Land Rover, and the result is the 2017 Range Rover Evoque Convertible.

Its roof is a polyacrylic fabric setup that Land Rover claims is the longest and widest convertible top of its type on any vehicle. It will stow flat behind the rear passengers in 18 seconds and come back up in 21 seconds, at speeds up to 30 mph. The folding mechanism weighs approximately 150 pounds, which is approximately 30 percent lighter than an equivalent hardtop system, according to the automaker.

Surprisingly, Land Rover didn’t have to change all that much to accommodate the new folding soft top. The crossover coupe’s doors are now frameless, and there’s a new rear spoiler that contains an integrated LED rear brake light. Rollover protection is built into the car behind the rear seats — two aluminum bars deploy within 90 milliseconds of a detected roller to protect the Evoque’s occupants. Land Rover also shrunk the trunk to 8.9 cubic feet to make room for all those new moving parts. 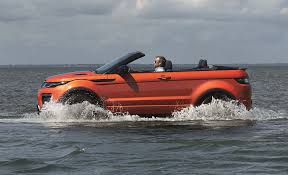 The 2017 Range Rover Evoque Convertible also marks the first utilization of the brand’s flagship infotainment system in a Land Rover vehicle. InControl Touch Pro utilizes a 10.2-inch touchscreen without any physical buttons — quick-access functions are displayed in a virtual dock on the bottom of the screen.
Share61Tweet38Share15
Previous Post

These Cars Have Dominated Nigerian Roads